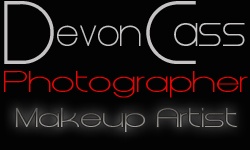 DEVON CASS: A PHOTOGRAPHER, MAKEUP ARTIST, MASTER OF THE CELEBRITY LOOKALIKE, AUTHOR, AND SO MUCH MORE. ALL OF DEVON'S TALENTS UNIQUELY BLEND TOGETHER TO MAKE WHATEVER HE DOES A POP CULTURE PHENOMENON.

HE HAS BEEN WRITTEN UP IN TOP MAGAZINES FROM MARIE CLAIRE TO ENTERTAINMENT WEEKLY, AND APPEARED ON EVERY MAJOR TELEVISION TALK SHOW THROUGOUT THE US AND EUROPE.

Born in Las Vegas and raised around fashion since the age of three, Devon was influenced by 70's hot designer to the stars Suzy Creamcheese. Devon gained a sense of style that is embodied in his work today. It was in his adolescence when Devon was introduced to an array of celebrities such as Dionne Warrick, Ann-Margaret, Shirley Maclaine, Diana Ross, Elvis, and Cher.

These clients of his aunt Suzy could be seen shopping at any given day in her trendy and elegant boutique.

Devon recognized that certain magic that celebrities embody and was inspired to enter into a glamorous life. At the age of 15 his family moved to Houston where he was accepted to the High School for the Performing and Visual Arts. It was then that he became obsessed and realized that photography and make-up would be his vehicle to achieving his future success. Picking up his camera and brushes at the same time, he found he had a passion for both and was determined to perfect these arts. After graduation Devon worked the Houston fashion scene.

He decided he wanted more diversity so he set his sights on New York City; at the age of 21 he found himself working with New York's major fashion photographers.

Determined to mesh his photography and make-up talent, Devon decided to publish a book titled "DOUBLE TAKE...The Art of the Celebrity Makeover" Devon wanted to bring glamour to the everyday women. Devon's strategy is that all women can achieve glamour with his helpful tips. Devon says, "You don't have to be glamorous all the time to be glamorous some of the time." Devon chose the format of celebrity makeup because he believes we are all inspired by icons and would love to achieve star quality.

When DOUBLE TAKE hit the bookstores Devon was sought after by major TV talk shows and news magazines such as, ABC's The View, Live with Regis and Kelly, Extra, Access Hollywood and Entertainment Tonight to name a few.

Also, magazines Marie Claire and Entertainment Weekly ran amazing articles showcasing Devon's talent. Marie Claire and Devon dolled up friend Kristin Green into a Pamela Anderson look-alike and entered a hot fashion party in NYC. Thinking Kristin was the real deal Naomi Campbell asked our "Pamela" to join her at her table. The next morning the news of the hoax broke in the fashion section of the Daily News and caused quite a scandal.

Devon's objective is to give people the opportunity to feel, become, and embody a more professional and celebrity syled image. His mission is to help give everyone he works with achieve greater success with his make up and photography know-how.

Devon's motto is: "BEAUTY IS POWER AND THE WORLD LOVES FANTASY, SO BECOME FANTASTIC!"